What does sustainability mean?

To clarify what Sustainable Sardinia aims to achieve, we need to talk about three topics: sustainable development, computational sustainability, and which are the sustainability problems in Sardinia.

What is sustainable development?

The origin of the concept of sustainability are remote and can be followed through the history of political philosophy, but in recent years, the term has become a buzzword with unclear meaning (Du Pisani, 2006; Spindler, 2013).

In 1987, in the UN’s Brundtland Report established the political framework for work in this field, and provided the following widely-accepted definition (World Commission on Environment and Development, 1987):

“Sustainable development is development that meets the needs of the present without compromising the ability of future generations to meet their own needs.” 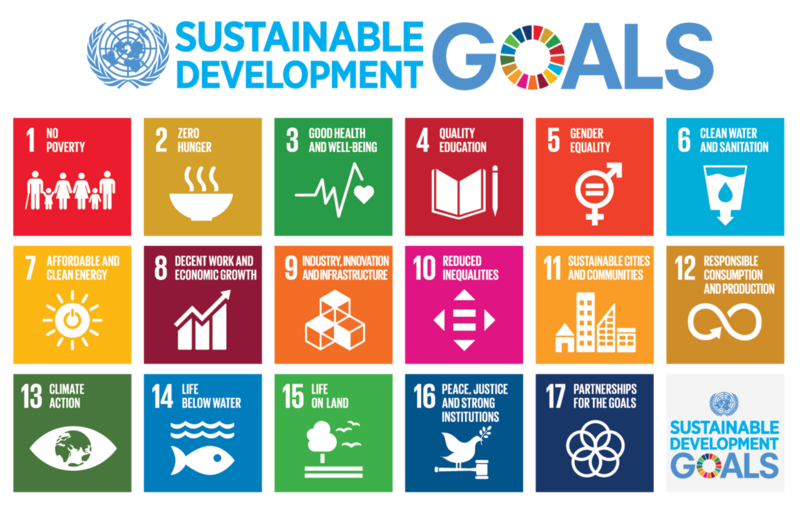 The 17 Sustainable Development Goals defined by the UN (United Nations, 2017).

To further clarify the Goals, the UN provided a list of Targets for each goal, for a total of 169. While some of the Targets apply in practice only to developing countries, others are much more general. For example, consider the following one (United Nations, 2017):

This Target could apply to developing countries as well as to economically depressed peripheral areas of developed countries. In both cases, non-sustainable development imposes a choice between jobs and pollution, often hiding under supposed sustainability for the financial benefits of speculators (Puggioni, 2014; Tola, 2016).

“For the management of renewable resources there are two obvious principles of sustainable development. First that harvest rates should equal regeneration rates (sustained yield). Second that waste emission rates should equal the natural assimilative capacities of the ecosystems into which the wastes are emitted. Regenerative and assimilative capacities must be treated as natural capital, and failure to maintain these capacities must be treated as capital consumption, and therefore not sustainable”

What is computational sustainability?

“Our vision is that computer scientists can and should play a key role in helping address societal and environmental challenges in pursuit of a sustainable future, while also advancing computer science as a discipline.”

The following are some examples of work done in the field of computational sustainability.

Why the interest in Sardinia?

Sardinia is the second-largest island in the Mediterranean Sea, It has a population of about 1.6 million people, mostly belonging to the local ethnic group: the Sardinians (Danver, 2015).

The Sardinians are an ethnic group within Italy similarly to how the Welsh, the Scots, and the Irish are ethnic groups within the British Islands. Although today Italian is the most spoken language on the Sardinia, the local Sardinian language, an autonomous Romance language that is not a dialect of Italian, is still spoken albeit often as a heritage language (Onnis, 2019). Other languages spoken in Sardinia are: Catalan, Gallurese, Sassarese, and Tabarkin. This diversity gives the island rich cultural traditions and a strong identity, but Italianisation, which had its peak during the fascist era of the 1920s, has – and still is – eroding this rich cultural fabric. This is because the population associates the Italian language with promises of improvement of their socio-economic conditions (Schjerve, 1993; Mongili, 2012), at the cost of cultural alienation. This process of cultural cringe shows why the social and economic situation of Sardinia can be described with the tools provided by postcolonial studies (Sulis, 2012; Mongili, 2015), similarly to what has been done for Scotland (Macdonald, 2006).

After the Second World War, Sardinia was one of the poorest regions in the whole of Europe. Starting from the 1950s, the induced industrialisation of the Renaissance plan improved the economic conditions of the inhabitants, but the improvement slowed down at the beginning of the 1970s until it stopped altogether (Biagi et al., 2019). Today, both the island’s income per capita and its employment rate are well below the Italian and the European averages (European Commission, 2010).

The results of non-sustainable development policies in Sardinia are visible. About half of the territory of Sardinia is threatened by the desertification process, and groundwater resources are quantitatively more than surface water. However, the concentration of nitrates in the water is higher than the allowed threshold according to EU regulations, mainly due to pollution (Ghiglieri and Da Pelo, 2016). Considering the state of degradation of the soil in the areas of now-closed mines, a report to the UN’s Food And Agriculture Organization (FAO) makes a stark remark (Aru, Tomasi and Vacca, 2006):

“The tapping of aquifers in coastal areas, which has skyrocketed with the boom in tourism, is not properly managed. Unfortunately, the excessive drain on underground water has altered the balance with marine waters, provoking saline intrusions that contaminate aquifers and cause saline deposits on soils.”

Also, Sardinia hosts a large number of military sites, in particular weapon test ranges, which are a danger both to the health of the people living nearby and the ecosystem (Zucchetti, 2005; Cristaldi et al., 2013).

For all these reasons, Sardinia desperately needs actual sustainable development policies, before it’s too late.

Aru, A., Tomasi, D. and Vacca, A. (2006). Chapter 17: Aspects of Environment Degradation in Sardinia. In: Tennyson, L. and Zingari P. C. eds., Preparing for the next generation of watershed management programmes and projects: Water Resources for the Future. Food And Agriculture Organization of the United Nations (FAO), pp. 172-173.

Spindler, E.A. (2013). The History of Sustainability The Origins and Effects of a Popular Concept. In: I. Jenkins and R. Schröder, eds., Sustainability in Tourism. Gabler, Wiesbaden: Springer, pp. 9–31.

United Nations (2017). Resolution adopted by the General Assembly on 6 July 2017, Work of the Statistical Commission pertaining to the 2030 Agenda for Sustainable Development.

World Commission on Environment and Development (1987). Our Common Future, Chapter 2: Towards Sustainable Development – A/42/427 Annex.